We are both frequent and passionate Africa travellers and like to explore the wildlife with our favourite 4×4 cars – The Toyota Landcruiser or Nissan Patrol. There is nothing which can beat the experience of camping in the bush surrounded by a beautiful landscape and wild animals. We often get asked how dangerous such adventure trips are. Respecting the animals, giving them their space is one of the rule to avoid dangerous situations. However, there is one golden rule to follow in the bush (Peter Allison):

Whatever you do, don’t run!

Urs Denier – Some thoughts from the “Mechanic & Photographer” Breakdown in the Kalahari We like wildlife photography which is exciting indeed. Always expecting the unexpected and sometimes having virtually no time to get the camera ready for a shot is a nice challenge. Equipped with long lenses allows us to get close shots from animals. However, people sometimes overlook the stunning scenery while being just focused on the animals. Thus, we also work with wide angle lenses to capture the beauty of the African landscape, open plains and lush grasslands during the rainy season.

Getting stuck in the deep sand or dealing with breakdowns in the middle of nowhere just an enrichment of those adventerous trips and opens the mind for innovation: Get a problem fixed in short time with limited resources or tools, see also picture series Central Kalahari.

We are also always amazed how helpful the local people are. This became obvious when we got stuck in a small river in Zambia while nobody was around. We never figured it out how the news spread, but roughly 15 minutes after we got stuck we were helped by people of a nearby village. Interestengly, not only few people showed up but half of the community helped us pushing the heavy vehicle!

This incident must have been memorable for the local people. Three years later we hired a driver for a long transfer in Malawi. We chatted with the driver and listened to his story where “self drivers once got stuck in a small river”. While telling, the driver was looking at us and finally got more and more excited: “You already looked familar to me when we set off… YES – Now, I rememeber! That was you!!! YOU were the ones who got stuck!!! Binoculars – A mandatory tool for tracking 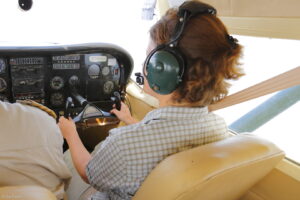 …and her favourite plane 🙂

We do not want to know how many animals we missed which were hiding in the bush. However, thanks to Nicole’s skills to spot even the almost invisible animals in the tall grass, we have been lucky many times to get good wildlife shots. A good driver is essential for a photographer to catch the animal in the right light while the angle can change everything. It is rather challenging to position the car at the right spot while preferably not getting stuck in the mud or in the middle of a Lion pride.